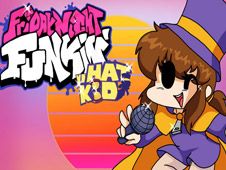 What is Friday Night Funkin’ VS Hat Kid?

A Hat in Time is a fan-made anime series from the internet, and Hat Kid, whose look you can already realize what it is, is the main character, and now that Boyfriend has ended up in his universe, the only way for him to return is if you will beat the kid in a rhythm battle, something we invite you to do right now with this mod, on the following custom songs:

You can choose to face off against this character in either the story mode or free play mode, that choice is yours, but you've got the same goal in both, which is playing the notes of the songs at their right time in the chart, winning once you've reached the end of the song.

To do this, when arrow symbols match above BF's head, you have to press the same arrow key, but know that if you miss doing it too many times in a row, you are going to lose and be forced to start again from scratch. Enjoy!