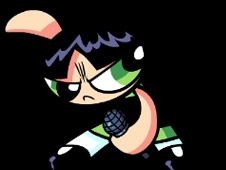 What is FNF vs. Powerpuff Girls?

We are sure that we have just made a lot of people very happy to be in our category of Friday Night Funkin mods online for free because the latest game we've added to it features Boyfriend going up against none other than the Powerpuff Girls, surely some of the most popular Cartoon Network characters for both new and old audiences, since there was a show more than a decade ago, and a new one currently airing.

This game is currently a demo where you go up against Buttercup on the song known as 'Spice'.

Boyfriend Vs Buttercup, the spiciest rhythm battle of the day!

As the song progresses, when it is your turn to sing, arrow symbols are going to match above BF's head, and, at that moment, you will have to press the same arrow keys from your keyboard, in order to hit those notes.

Keep at it until the song ends, but know that if you miss hitting those notes too many times in a row, you lose and have to start again from scratch. Good luck, enjoy!