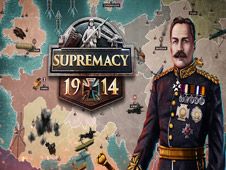 The year 1914 marks a very important moment in the history of humanity, since that is the moment when World War 1 began, with the skirmish between the world's countries lasting four more years, all the way to 1918, and while we would not want the hard times of those days to happen once more again in real life, why not enter the war virtually, through an online strategy game such as Supremacy 1914, clearly a highlight of our website!

Lead your forces into battle and win the World War!

The game is a real-time strategy one, which, as you can see, you can access directly from your browsers, where players assume the roles of generals at the helms of the various countries participating in the war:

The game works in real-time, as previously mentioned, which means that real-life players assume the command of their armies, but countries that have no players attached to them are controlled by the game's AI, and inactive players are also going to be replaced by the GPU so that the campaigns continue, and the war does not stop until there is a clear winner!

The game has a total of 13 maps, and they can differ in various ways, such as the one that is not divided into countries, but provinces. Win the individual battles, take over enemy territory, and win by overwhelming all the other nations with your might! This is also longer than your normal game, as it can last from four to eight weeks, with players returning to play and making decisions whenever they can.

What are the powers you will use to win the wars?

For starters, you should take full advantage of the various provinces in your country, as they are all known for producing their own specific resources, which you will use for your army and troops: gas, oil, grain, fish, iron, lumber, and more! You want your troops fed, the tanks and vehicles to run, and your weapons loaded, believe us!

Grow the production of your country and use its gains to create more troops with bigger infantry units, as well as various tanks, cannons, planes, boats, and other vehicles you might need.

As in real wars, you can make alliances with other nations, you can spy on enemies and use the info you acquire to get the upper hand over them, check the media to use its info as well, or manipulate it, but one of the most important things in your quest to win the battles is to make sure that the morale of your soldiers is high since they will perform better.

Become the next greatest war chief of history!

As you would expect from a multiplayer experience, there are rankings, so the more battles you win, wars you fight, and territory you conquer, you will advance through the spots, and we hope you do that, make a name for yourself, and keep coming back for fun as often as possible!