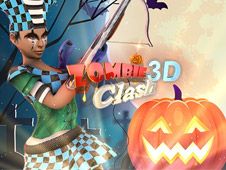 What is Zombie Clash 3D?

The Clash Games series is constantly one of the most popular ones when it comes to multiplayer shooting games 3d, and depending on the occasion they get adapted into various new ways, just like we invite you to see is the case right now, when our team invites you all to play Zombie Clash 3D, even if Halloween has already passed!

Let's have a 3d zombie clash where they shoot guns, not eat each other!

You will become various clown avatars, and the setting where you are playing resembles an abandoned theme park, where in addition to the other players you are fighting against, you need to be careful of zombies!

Go around the map, shoot down the members of the other team, and be careful not to let yourself get shot since you want to be left alive, get a lot of kills, and climb in the rankings!

As for the controls, they are very easy to understand:

Let's have one of the craziest and most fun shootouts in recent memory, and don't hesitate to invite your friends along for fun as well, they won't regret it!