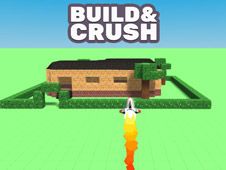 What is Build and Crush?

Among the many games we've had here in the past to have been inspired by Minecraft and its pixelated world of blocks, we are certainly most excited right now to share with you all the one known as Build and Crush, where you can do these two activities in a very interesting manner, and, even better, you get do to it in a multiplayer setting, and compete with players from all over the world!

Build better, crush harder, and be the best player in the world!

As we said earlier, this is a multiplayer game, and in it, you will choose on which side of the fence you want to be, something you do in the game's main menu. Of course, the two options are: you either build stuff or crush the stuff built by others.

If you chose to Build, you will use the blocks at your disposal to create various structures and buildings, whatever your imagination tells you, and you can share them with the other players by making them public. It's a great mode for creative kids and adults alike!

If your choice is to Crush, use weapons such as TNT, cannons, earthquakes, lightning bolts, tornadoes, and many others, both natural and man-made to crush the creations of the other players.

Use the mouse for either, and we recommend you try out both modes because that way you can experience this cool new 3d game at its best and have the fullest experience out of it!