FNF vs Batman Who Laughs 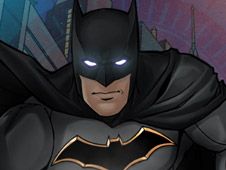 What is Batman Caped Crusader Chase?

Batman Caped Crusader Chase invites you to once again step into the shoes of the world's greatest detective, which is how The Batman is also called at times, and while the Riddler is your enemy in this game, and he is one of the most cunning antagonists this hero has had, you won't be solving puzzles, but going on a chase to stop the bad guys and save the day!

Help Batman chase the bad guys, and become the caped crusader yourself!

Batman will run on the three-lane course automatically, and you will use the right and left arrows to change lanes, the up one to jump, the down one to slide, movements that you make in order to avoid all the obstacles on the road, since bumping into them causes you to lose right there and then.

Instead, collect as many coins as you can along the way, those you should not avoid, and when you see bad guys running from you, get close enough to them and press the spacebar to shoot batarangs at them and bring them down, and before your run ends, try catching as many of them as possible.

We wish you good luck and all the best, inviting you to stick around for more fun to come, you won't regret it!