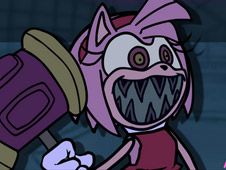 What is FNF vs Possesed Amy?

Amy from Sonic has been Possesed, and the only way to bring her back right in this music is through the power of music, something that you and Boyfriend know best about, as you will try to defeat her in a rhythm battle right now, on the following songs:

BF Vs Amy, the musical fight that will defeat the possession!

From the game's main menu you have to make a choice between the story mode and free play mode, after which you need to give your best to win in both, which is done in the same way, by reaching the end of the songs, and you do that only by playing all their notes according to the charts.

This means that when you see arrow symbols float and match above BF's head, you will have to press the identical arrow keys. Be careful not to miss hitting them too many times in a row, or you lose. Good luck, enjoy!