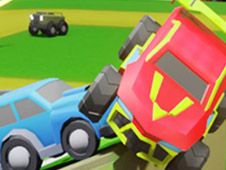 What is Cars Chaos King?

Let's become the king of chaos in the world of cars, only with one of the best new multiplayer games online 3D to have been added on our website right at this moment, which masterfully combines racing games with cars together with action and shooting games, and we are sure that boys who love both genres are going to love this game as well, from top to bottom!

Can you become the cars king of chaos?

The car will race forward on the various tracks/maps automatically, with you using the A, D keys to rotate it in the direction you want it to go. The goal you have is quite simple, and it is to destroy the other cars on the map, also controlled by other players while making as much chaos as possible and increasing your score.

Drive through boxes to destroy them, and grab the mystery ones (that have a question mark on them), so that you get weapons. Use a weapon by pressing the spacebar, having inventory such as cannons, which you can use to shoot down structures or the other cars driving on the map.

Try to cause more destruction and mayhem than the other players to get more points than them while being careful not to get eliminated by them instead. Good luck to all the future kings of chaos, and make sure to stick around to see what other amazing content is still to come here!

Use the A, D keys, spacebar.