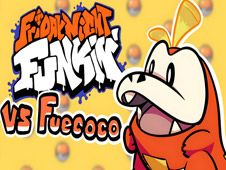 What is FNF vs Pokemon Fuecoco (Violet Vantage)?

A crossover between FNF Games and Pokemon can never go wrong, and we plan on proving that to you right now and here through the addition of this one, where you fight off against a pocket monster on no less than three songs, making this a full week mod you NEED to play. The songs are:

Catch all those notes to win the musical Pokemon battle!

From the main menu, you will have to make a choice between the story mode and free play mode, as well as pick the difficulty level you are most comfortable with. Either way, winning is achieved in the same way, by reaching the end of the songs, and that is possible only by playing all your notes according to the charts.

How? Well, when you see arrow symbols float and match above BF, press the identical arrow keys at the same time. Be careful not to miss hitting the notes too many times in a row, or you lose and have to start again from scratch. Good luck and all the best we want to wish all of you!