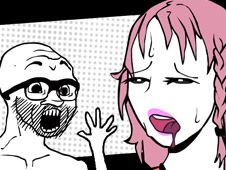 What is Soyjak Funkin: Soy Boy vs E-Girl?

Soyjak Funkin is an FNF mod made for the current internet culture since we're having a battle of Soy Boy vs E-Girl, two stereotypes who will now battle it out on the song called 'WomanOMG'!

Soy Boy vs E-Girl is going down now in Soyjak Funkin!

Reach the end of the song by hitting all your notes according to the charts, something that you do by pressing arrow keys at the same time as the identical arrow symbols match above your character on the right. Be careful not to miss hitting the notes too many times in a row, or you have to start again from scratch. Good luck, enjoy!