FNF vs Shadow The Hedgehog 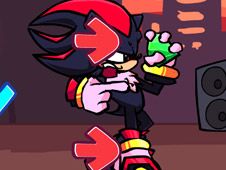 What is FNF Shadow’s Ultimate?

Your newest FNF battle is against Shadow the Hedgehog on the song called 'Ultimate' and there is no doubt at all in our minds that you are going to have a really fun time here, as this character does not really appear as often as he should, but now that he is here, you're about to have a blast!

Sing the Ultimate song with Shadow in FNF!

When you see floating arrow symbols match above BF's head, that is when you need to press the identical arrow keys to hit your notes, and if you can keep at it until the song ends, you win. Be careful not to miss hitting notes too many times in a row, or you lose and have to start again from scratch. Good luck, enjoy!