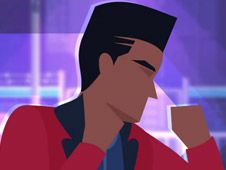 What is Typing Fighter?

The categories of typing games and fighting games online don't usually get mixed up together, and they can be considered the opposites of the spectrum when it comes to gaming, but Typing Fighter unblocked is a game that will prove the opposite, since the same skills and timing abilities you use to type words very fast can also be incredibly useful in a one-to-one combat situation, so if writing words on the computer is second nature to you, fighting will become the same right now!

As you move up the streets, you will encounter one enemy after another, and for each one, you receive a sentence to type, and as you do it you will punch and kick them, so type it fast and correctly to defeat them, because if you don't, and you get hit too much, you will lose the battle instead.

The health bar you have to protect is on the top left, and on the top right you see how many points you are making from defeating the enemies, a swarm of which is endless, so keep going on for as long as you can to see how big of a score you can make. A great time typing and fighting we now wish you all!