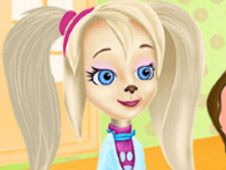 What is The Barkers Dentist?

Dentist games with animals don't come by as often as you might think, since we know that when you think about teeth care you first think about humans, who are the most interested in this aspect of their lives, but in The Poochies, dogs behave just like humans, so of course, they would go to the dentist to have their teeth fixed, a role you will now play in one of the best new games of the day!

Become a dentist for The Barkers!

Start off by choosing which of the four family members you want to treat first. In the clinic you then receive the tools you need for the procedures, one by one, and then use them, moving from one to another until you've treated all the teeth correctly and they have no bacteria and also look amazing.

Drain water from the mouth, wash it up, identify the bacteria, get rid of it, remove stains from the teeth, plug holes inside of them, and any other small thing that needs to be fixed, and if you do that on and on, in no time at all the patients will have their teeth look as new, thanks only to you, who will also have had plenty of fun!