Slenderman vs Freddy The Fazbear

Friday Night Funkin’ at 5 AM 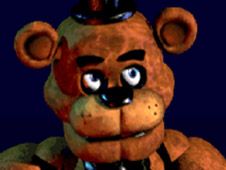 What is FNAF Freddy Fazbear Shooter?

Welcome to the FNAF Freddy Fazbear Shooter game, where elements of shooting games 3d as well as idle clicker games get combined with the wonderful world of the horror game series Five Nights at Freddy's, and we are positive that you're going to have quite the awesome experience, so let's begin playing right now!

Use the mouse to shoot down Freddy or other animatronics that might appear, doing so until you deplete the health bar of each robot, and then get coins in return. With said coins you will buy new weapons to do the shooting on them with, which will deal more damage, making them even more useful when the monsters get bigger and stronger.

Upgrade everything you can, causing more destruction, and having more fun as only here is possible, day after day!