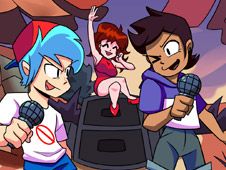 What is FNF vs Luz Noceda (The Owl House)?

FNF's BF ended up in the world of The Owl House where you have to help him defeat Luz Noceda, something that you are going to do on the following songs:

Defeat Luz Noceda from The Owl House in FNF!

Whether you are playing in the story mode or free play mode, hit your notes according to the charts until you reach the end of the songs in order to win the battles.

Be careful not to miss your notes too many times in a row, you lose. To hit notes, press the arrow keys at the same time as the identical arrow symbols match on the top right. It's simple, so good luck!