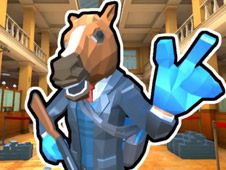 What is Bank Robbery 2?

After the first Bank Robbery Game, a sequel was almost guaranteed to appear, since that one had been received very well by the visitors to our website, or any other place, for that matter, so right now you should expect to have a ton of fun once more, even if this is your first dip into this series.

Let's do another Bank Robbery online!

In each level you have targets of wealth that you need to steal from the banks, usually being held in safes of various kinds, so make sure to break them down and grab what you need, while you avoid getting shot or caught by the police, and make your escape safely.

This means shooting the police before they can shoot you. With the money, you earn you can buy new people for your team, as well as acquire other useful items, such as:

Use WASD to move, space to jump, shift to run, the mouse to aim and shoot your guns, and E to use the objects such as the drill or anything else that can help you in your mission.

Now that you've understood it, we're sure that trying this game right now is your priority, so don't waste time, but start playing it right away!

Use the WASD keys, spacebar, shift key, the mouse, and the E key as well.