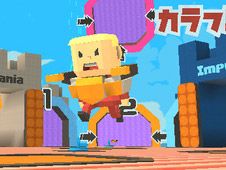 What is Kogama: Impulse Mania?

Kogama: Impulse Mania is one of the top new multiplayer shooting games in 3D that our administrative team is happy to have now shared with you in this ever-evolving platform where users can create their own content but also play that of others, with us always picking out the most interesting new releases to share with you, just like we have done right now!

Start off by choosing between being part of the Red Team or Blue Team, after which you go out on the battlefield and give your best to shoot down the members of the other team, and if you can get lots of kills and be the final one standing, you earn all sorts of cool rewards, from new weapons to use, as well as new skins to become.

Push your opponents into the numbered rings, to score points, and the first team to get 30 of them becomes the winning team. The impulse guns you use, as their name suggests, shoot waves at the enemies to push them, which is how you try to get them to fall into the rings for points.

They will attempt to do the very same thing to you, of course. Use WASD to move, shift to run, the spacebar to jump, and the mouse to aim and shoot your impulse weapons. Let's start right now, and we hope to see more of you here, as per usual!

Use the WASD keys, spacebar, shift key, and mouse.