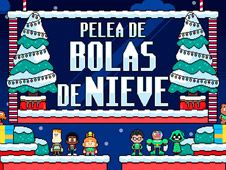 What is Cartoon Network: Snowball Fight?

Snowball Fight is one of the best new Cartoon Network Games online from our website for you to play this winter, or any season, really, since we're talking about a game that not only you can play in 2 players, not just with the computer, but it also features characters from all of these many shows we know you love:

Have a Snowball Fight in 2 players with Cartoon Network characters right now!

From the main menu, you choose between the 1P and 2P modes, after which the players choose their team of three, from any of the four shows mentioned earlier.

In turns, the two players shoot snowballs at the members of the other team across the house that separates them, with the goal of depleting the health bars of all the characters.

When the health bar of the opposing team is empty and you still have yours, you win, but your opponent will attempt to do the very same thing.

To aim and shoot the snowballs, drag the mouse and then release it when you think you've got just the right angle to make your shot. The computer assigns which character shoots when them being placed on a platform for each.

As you can see, the premise is both really fun and totally exciting, the gameplay is easy, and the characters are a treat, so begin playing right now, and see why here you can find the very best games on the internet once again!