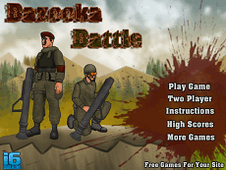 What is Bazooka Battle?

Bazooka Battle is the game where you have to eliminate your enemy with Agee to make him to want not to be provoked to fight, but for that you need a lot of precision and skill that the enemy you can not see . So your role is to anticipate his position and shoot. Agee is a very dangerous weapon, used for tanks and other vehicles or large buildings, but in this game is used to destroy the opposing camp. You have a team of two people, you control them both, but make sure you do this be a perfect team, unbeatable. Your team is positioned on a rock and the opposition team on a guy, so the difficulty level is so high. Between the two there is a gap in the rocks that if you slip, you die, and your progress will be lost. Watch every step, think before you shoot, analyze distances, aims and pulls the trigger only later. Be careful that every enemy is very strong. Do your best to accomplish your mission successfully without being hurt. Hopefully this game is to your liking and invite you to try the other games on the site.

With the mouse you will have to try to aim as good soldiers of the new children's game.