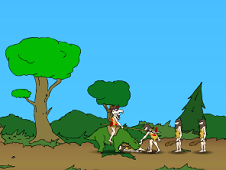 Age of War I is the first game created after the famous board game, which can be played online, and the Friv-Games.com team managed to bring this strategy game in front of you for free.

The goal of the game is to survive and destroy the enemy base as fast as you can earning points and evolving day by day. The game is divided into cive ages. To move to the next age, you need Xp points. To gain these points, you have to kill enemy units and constructions. you also gain Xp points when one of your units is killed. You can also build defenses by finding the balance between defense and offense is the key. You will also be able to use a special attack. this attack will need time to be available again after you use it. Each aga has its own special attack. you cannot repair your base, but it will gain health points every time you evolve to the next age. Protect your base at all costs. The difficulty of the game can be chosen between normal, harder, impossible.

The graphics of the game are quite colorful, being in summer, the green nature, full of trees, and on the left side, you will have your drop of stone and the factory of prehistoric soldiers that you will have to build. In the upper right you will have 6 icons:

The army that you made should be built in time depending on the money and points you have, and in this way you will be able to buy the following: For $ 15 you will be able to create a Club man, for $ 25 you will be able to you create a slingshot man, and for $ 100 a Dino Rider; When discussing stable weapons you will have several options: For $ 100 you can buy rock slingshot - which is a rock launcher that mounts to your cave, for $ 200 you can buy egg automatically - which is an egg launcher, but the eggs will fall from the sky, and for $ 500 you can buy primitive catapults - but most will help you catapult with stones that although it is a primitive catapult will do its job really well and will destroy many enemies which will help you win the war between the ages;

Probably one of the best strategies we can recommend in the new flash game Age of War is the following: considering that you can create two types of fighters right from the beginning, we advise you to create your first fighters who are cheaper and that attack with the ax, sword or fists, respectively those who attack from close, after which you build your riders who will come back and throw stones, slabs or even weapons, and in this way you will be able to You defend riders who are expensive, expensive and destroy the small army that you can renew much faster and cheaper.

The life of your cave and your enemy has 500 points; depending on the character that attacks it, the cave will lose more and more of its life, but when you can no longer master things you will have to activate the special attack button that will restore the temporary peace on the battlefield, after to prepare you for the battle that will begin from minute to minute. If you manage to raise $ 400 you will be able to evolve in the next game mode which will make you a true knight.

the mouse will have to manage the whole action in the new strategy game.