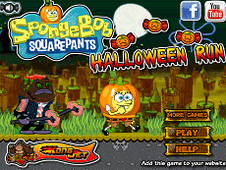 What is Spongebob Halloween Run?

Spongebob Halloween Run is a new game added to our website play-games.com and added Spongebob Games category because it is a game where adrenaline and excitement are two vital elements. Spongebob Halloween Run is a game where you use your mouse to move and to jump to your favorite Spongebob. In this game, during Halloween, Spongebob running from a monster, held after he continuously. You will need to control Spongebob to run without tripping or doing something wrong during the journey because if that happens you will die and lose a life. You have a total of 3 lives, that if you lose, you start the game from the beginning, all progress until then losing it. Although it seems a very simple game, you know that it is not so, especially because during the race, you have to dodge some obstacles and besides that, you have to collect all the pumpkins to score points. The points are very important if you want to come in among the top players on the site. If you do this, You come automatically in the running for the grand prize. Each level has its own difficulty, so how much more you before, the degree of difficulty will increase. Give it your best and finish each level successfully! Hopefully this game is to your liking and invite you to try the other games on the site. Thank you!