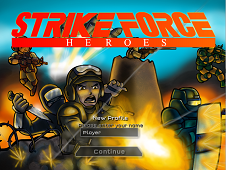 What is Strike Force Heroes?

You can't know when it's needed some strike force heroes for emergency politics or war situations so you would better always have some soldiers prepared for what is the worst in this world! In this awesome and fantastic game, the government has found about some operation which is processing for some time and who has to get stopped right now because when it is gonna be finished, and if it works, it is gonna put in danger the lives of a thousands ore more people! Far away on a secret location in the Ocean, on a island, some scientists are processing this operation and you are send right there to stop them but you are gonna have an army by your side because they are also gonna have some defense forces. This is a criminal or terrorist action because they a wanna create a super human race, which is gonna conquer the world and all the governments around the world. Good luck and use the mouse to fight them all!