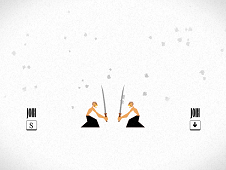 Zazuki is definitely one of the most dangerous way to find whose better from the two fighters, because the loser instantly dies. This is a kind of saint rule of them so the dead one, every time goes in the skies, alongside the gods and watch the ones left on the Earth, still trying to find for their honour and customs. It's easy for you to recognize some zazuki fighters, judging by their shirtless appearance and their pretty alike physic. They do not take in count the way to win, but the victory is the most important. Join the left or the right player and let's start the swords attacking mission right now! Try to make sure that you will kill your opponents, because there is no other chance for you to escape so it's you or him! Use the arrow keys or the A, S, D, W keys in order to defend yourself from the opponents' rage and use the bottom arrow key for blocking the opponents' hit. The block only lasts for a couple of moments so you can't profit about if so much. Use the right key, keeping it pressed for a while and then suddenly press the left key for an ambush attack and the one who manages to strike first, wins!