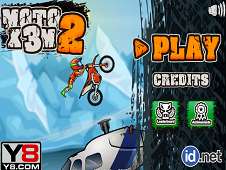 Moto X3M 2 is the sequel of the awesome and so cool series of Moto X3M adventure, where the goal has been kept the same but the ways are different. Start with the very first level, from so many of them, all of them of different difficulty so make sure that you won't miss the chance to become the greatest motorcycle rider ever, not wasting time and of course, not getting too damaged or injured at all. In the middle of a snowy area, you have to worry less about sliding on the ice and more about accomplishing the right stunts, jumping in the circles and of course, unlocking new achievements, all of them necessary for getting to the next level in no time. This is not everything, because the obstacles you have to jump over are some huge chainsaws and different sharp blades, all of them ready to simply sting you and destroy any other players just like you, unconscious to join those lands. If you died, you would need to press the SPACE bar for reloading from the last place you've fallen. Go for it now! Blow the mines in your favour of course, and that way build up some extempore bridges to cross!