Get On Top Online 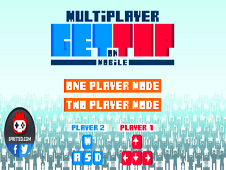 What is Get On Top Online ?

Such a fantastic fighting game, which also could be played in two players, this incredible and so cool adventure offers to you the occasion to use either the arrow keys or the W, S, D, A keys in order to control both of the fighters, who are actually some methalical robots. Right now, in this cool and so incredible adventure, you have the chance to destroy your opponent, either if he is CPU or a friend of yours. This game, has two game modes, so you can pick the 1 player mode or 2 players mode but if you select the second option, make sure that you will ask a friend to play this game alongside you. Get to the work right now, before there will be too late and fight! There is no way to punch your opponent, because the arms and hands of these robots are bound to each other so using the force from the arms, try to project the other player to the ground, making his head hit the floor to win a round. The first who reach 10 victories win the game but you can play it as many times as you want, never getting too boring for any of you. Good luck and reach the top of the ranking table at the end of the game with your own robot, never letting your opponent strikes you before you do!