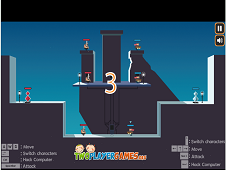 What is Dead Fight ?

Dead Fight is a special local battle game, which offers to you the occasion to use the arrow keys in order to move and of course, the SPACE bar in order to make sure that you will shoot the other opponents, players from the other team. The goal is to use your special fighting ability in order to make up the greatest attacking plan as soon as you can so that way you could easily make sure that you'll win. It's a dead fight because the game ends only when a whole team has died so make sure that, after you've picked up the team you wanna join, your team will be the stronger one. Jump from platform to platform as soon as you can, in strategically ways and make sure that you will kill all your opponents, from as few shots as you can in the shortest time possible. Good luck and pay close attention tothe details and do not get surprised by your opponents, because a single mistake could cost you the whole mission. Fight over and over again and unlock different levels and different battle field for this huge brawl, the dead fight among these two armies of hooligans who are fighting each other!