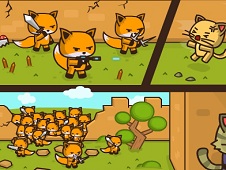 What is StrikeForce Kitty 2?

Well, dear talented friends, it seems that the last StrikeForce Kitty game that we brought to you has been very well received by the majority of our friends because as we have told you before, it comes from a lot of categories that are really popular and we know this very well because we always pay attention to you. Well, because of this, we have decided to bring you another game from the kizi games category, a game named StrikeForce Kitty 2 so it is pretty obvious that it will resemble the last game from this category very much.

Well, truth be told, the main characters will be the same, but the story behind the game is a little different. It seems that it was a very beautiful day in the kingdom of the kittens when suddenly they were attacked by an army of dangerous foxes who have even brought a big wooden fox to help them with the fight. Well, it seems that the StrikeForce Kittens haven't given up and they made a plan with the king to sail with a submarine and then surprise the foxes and defeat them. You can help them win and get their kingdom back. Good luck!