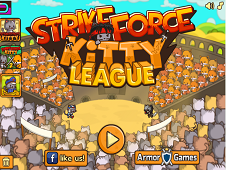 What is Strikeforce Kitty League?

Strikeforce Kitty League is maybe one of the greatest strategy and fighting at the same time, game brought by our site for improving your thinking capacity and of course, for your fun and entertainment! This game presents you some strongs cats and kitten who run the world of fighting into one area but unfortunately they were defeated by a crew of raccoons and now they have to share the area's territory. This is unacceptable for kitten so now they have to prove that they are the greatest from this area and there is one way yo do this, the final fight! The final fight is the fight which decides who stays and who leaves this area and it is gonna be done between kitten and raccoons so prove that the kitten are stronger because they were first on this territory which means that they are the real leader of it! Train your kitten, improve their skills and magical powers, and when it comes the moment of the final fight, do not hesitate to practice everything you've trained in the past, in order to get rid of these little and fool raccoons which have mess with the wrong kitten! Good luck and have a lot of fun!