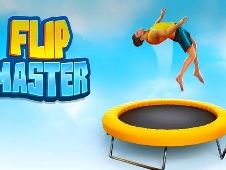 What is Flip Master?

Who doesn’t love a good jumping session on a trampoline? In Flip Master, you can knock out some of the moves you wouldn’t dare try on a real trampoline. The reason why that’s mentioned is that the first thing you see when you load the game is a warning not to try some of the stunts you do in the game. Before you play, you should get accustomed to the menu.

There are three menu buttons above the play button in Flip Master:

When you press play, you’re met with a brief tutorial on how to play Flip Master. While bouncing around on a trampoline sounds fun at the end of the day, there are still objectives you need to meet in this game, mainly: landing on your feet. It is kind of funny watching the character fall down so ungracefully on the trampoline without the player’s intervention.

There is a bit of physics involved with Flip Master. If you see yourself leaning one way, and about to hit the pavement, land on your belly, hit your head, or hit the side, you can readjust yourself mid-air.

Collect enough coins at the start level to spin for new trampolines and characters.

●    Ideally, you will want to land on your feet, but if you find yourself without much space, it’s perfectly fine to land on your back, as long as you don’t hit your head on the edge of the trampoline.
●    If you see your character leaning over during a fall and about to land on the stomach, it wouldn’t hurt to attempt a flip while moving your mouse in the opposite direction. Landing on your back is better than ending the round.
●    When you see a red balloon, go for it. You could potentially get a decent handful of coins for another spin.