No Mercy for Zombies 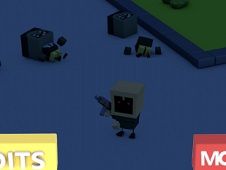 What is No Mercy for Zombies?

A very interesting 2 player game for kids is appearing here on our website, and this game is called No Mergy for Zombies and it's from the 2 player, adventure and fighting games categories.

You dear kids can see how much fun you can have in this new game, because dear friends this is a very special adventure game for boys, in which you will have to fight for your city's safety, because a new zombie outbreak is about to start, and you are the last line of defence.

Because this is a 2 player 3D game, you dear friends will have to work and be synced as a very good team, because the 3D zombie characters will come from all the streets of the city, and you will be stuck in the middle. The first wave of 3D zombies will have a few enemies, but you can see that player 1 and player 2 will have to work together in order to fight against the zombies and win the battle.

The zombies will attack player 1 and player 2 in waves, and you will be able to receive points by destroying all the zombie waves by using the "Attack" button on the screen for both players. Make sure that you are fast, because even though player 1 might be safe, player 2 might be under attack by several zombies.

Make sure that you keep player 1 and player 2 safe during this new adventure by the use of your mouse. Make sure that your 3D city will surivive all the waves of zombies. Once you gain points, you can see that you can upgrade your weapons from axes to Ak-47 assault rifles, which will be more powerfull and might destroy more zombies at once.

Pick your favorite weapons in this new 3D adventure, and you can see how many points player 1 and player 2 might gain during the entire action. Have fun!