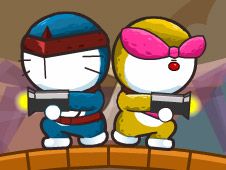 What is Doraemon Adventure 2 Player?

We know that there are pair of friends out there who really love playing games in two players, as well as games with Doraemon, which is why having a 2-player Doraemon game online as awesome as Doraemon Adventure 2 Player is something that should excite you since you are in for an awesome adventure fun from start to finish!

Like in most of these platform-adventure games in two, co-operation is key, which is why the players who control the blue and yellow Doraemons need to focus and work together since only teamwork will get you from one level to another. There are twelve in total to pass through, and they level up in difficulty constantly.

Work together to go up and down, but always forward, on the platforms, trying to reach the end of the level without falling into pits, traps, or hitting any of the obstacles, while at the same time avoiding or killing the enemies that you encounter, for which you may gain points in return, so always aim for a big score too!

Start your 2P adventure with Doraemon right now, and don’t stop until it is finished!