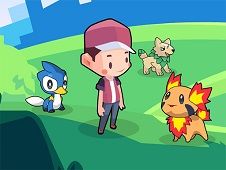 Dexomon is a pokemon type game where you fight with your "dexomons". These tiny creatures are the ones fighting for you. At first, you'll be able to choose what dexomon you'll start with, for example, Ostroth. Each dexomon has its own special attacks, for example, Ostroth has Tackle which allows him to tackle the enemy, Energy ball which sends an energy ball toward the enemy, dealing damage. Lastly, you've got Heat Wave and Fire Storm, Heat Wave sends a strong wave of heat, melting the enemy which deals damage, Fire Storm spawns a lot of fire on top of your enemy, also dealing damage.

The amount of damage dealt in the game is random, sometimes the attack will be "very effective", dealing a huge amount of damage but sometimes the attack will be "weak" dealing very little damage. Some dexomons can also heal, increasing their health. Some attacks may also be critical attacks, dealing higher damage than the attack can usually give. As you defeat enemies, you advance through the map, getting closer to the end.

Are you ready to be the Dexomon king? Let's play to find out!

Use the mouse or finger.