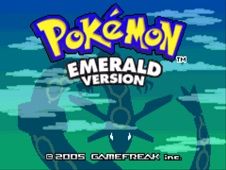 What is Pokemon Emerald Version?

The world of Pokemon awaits you once more, this time in Emerald Version! The Emerald version of the game is a remake of the Ruby and Sapphire variants of the game. This version brings a lot of cool new changes and differences for you to explore!

The main changes between Emerald and its predecessors are the addition of the Battle Frontier, a new place where you can do 2 on 2 matches with your pokemon. The plot of the game starts with the 2 enemy teams, Team Magma and Team Aqua, both of these times succeed in awakening a legendary Pokemon, Groudon, and Kyorge but soon this will turn out to be a mistake. The 2 pokemon do not obey their owners, they start to fight causing the weather to alternate between rain and sunshine. You must awake another legendary Pokemon and stop them!

The goal of the game is to first get strong enough to defeat the gym leaders by traveling around the Hoenn region, earning the eight gym badges then to take on the Elite Four and defeat the Pokemon Champion to succeed. The Gym Leaders are:

Once the Gym leaders have been defeated and you claimed all of the gyms, it's time to take on the Elite Four and lastly the champion! The Elite Four are:

In the Emerald version, battles are spontaneous, you don't even need to talk to initiate a battle nor your opponents do. In the Battle Frontier you can explore the 7 different facilities where you can take part in pokemon battles. It is meant to be a challenge for you.