Kirby and the Amazing Mirror 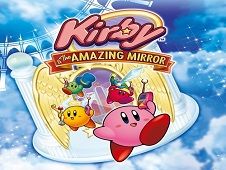 What is Kirby and the Amazing Mirror?

We would like to show you our newest emulated game on our website, Kirby and the Amazing Mirror! In this game, there was a land called the Mirror World where any wish reflected in the mirror would come true but the good times didn't last forever, and evil hands took the land.

You need to save the Mirror Land from the evil hands that took it by defeating bosses and going through the levels. This game is a 2D platformer game, the main character you are playing as is named Kirby, he has a few abilities up his sleeve like inhaling objects and enemies.

Kirby can inhale enemies, and he can shoot them out to act as defense from other enemies or to break blocks that are in his way. Some enemies and items cannot be inhaled or Kirby can only move them. Kirby can also fly by inhaling air and inflating like a balloon allowing him to get over harder obstacles.

There are many bosses Kirby has to defeat:

We hope you can free the Mirror World from evil hands!