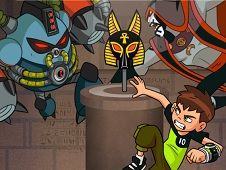 What is Tomb of Doom?

Ben 10 Tomb of Doom is an action game, in which you will have to use the super powers of Ben 10 and the aliens that he knows so that you can fight with the creatures from the Doom temple.

The whole game takes place in Egypt, in a tall pyramid, in which Ben Ten will be thrown and he will have to turn into a leopard in order to succeed in destroying the enemies that come towards him. Most of the time, the enemies that come to Ben 10 are the Egyptian beetles, super pharaohs, mummies as well as other insects and monsters that can destroy you if you fail to defend yourself. If you manage to destroy several beetles at once, you will be rewarded with COMBO, bonus points, which will place you directly at the top of the leaderboard.

Try to kill as many enemies as you can, in a short time, because just in this way you will survive!

use the mouse, hold and click on the enemies to kill them!