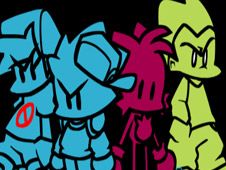 What is Sonic's Fridays Funkin'?

So far, Friday Night Funkin mods with Sonic the Hedgehog have been received extremely well on our website, so of course, we would offer you up a new one on a plate as soon as we can, just like we are very happy to do right now with the game called Sonic's Fridays Funkin', a new version of this game which we are sure you will love immensely!

Sonic the Hedgehog is the flagship character from the Sega consoles and brand, and a video game character that has been around for decades, who is an alien blue hedgehog with spiky hair who has the power of running really fast, almost to the speed of light, and now he wants to battle Boyfriend in a musical battle, and show his skills in other fields as well!

Choose between the story mode or free play mode, pick a level of difficulty you think is suited best for your level of experience with the game, and then pick the week and character you want to battle against.

In this battle of rhythm, you have to press the arrow keys at the moment when their symbols from the screen are matching, and upon doing so you are playing the song correctly.

If you do it right and turn the progress bar completely green, you become the winner but don't make too many mistakes, or you will turn it red and your opponent wins. Good luck!