Slenderman vs Freddy The Fazbear 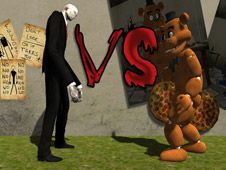 What is Slenderman vs Freddy The Fazbear?

Two of the most iconic characters in the world of horror games online are coming face-to-face right now in an action, survival, and scary game online you should not miss out on for anything in the world, a game that is called Slenderman vs Freddy The Fazbear, where the two of them have finally met, and instead of getting along or being friends, they will actually compete against one another, something that you join them in, and we will teach you how right here and now!

Slenderman or Freddy? Who do you want to be most?

Yes, this game gives you the option to be any of the two characters, and in order to enjoy it to the fullest, we would definitely recommend that you try both modes, since that brings the most out of the game.

If you are Slenderman, you win if you find eight pizzas on the map since pizzas are what Freddy's Pizzeria is known for, and to win as Freddy, if you chose him, you have to find Slenderman's eight mysterious pages.

Learn the controls to the Slenderman vs Freddy The Fazbear game:

You use the W, A, S, D keys to walk around the 3d-rendered map, the left mouse button to attack, the right one to block attacks, and with the mouse wheel, you change weapons. Use shift to run, the spacebar to jump, ctrl to crouch, X to prone, and F to pick up items.

Either character you become, go on the attack, collect the items, and win the horror showdown, in a game for the ages!

Use the W, A, S, D keys to move, mouse to attack or block, change weapons, the shift key to run, spacebar to jump, CTRL to crouch, X to prone, F for picking up items.