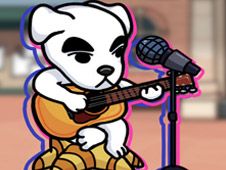 What is Friday Night Funkin VS K.K. Slider?

Two of the hottest franchises in the world of online gaming are now coming together in the form of Friday Night Funkin VS K.K. Slider, and we're talking about FNF Games and Animal Crossing Games, since this new character you will have a rhythm battle against comes from this series, and he brings along some new and fresh music to enjoy!

Meet K.K. Slider and learn why Boyfriend has to battle him

KK Slider is a cute white dog who plays the guitar, and those concert Girlfriend and Boyfriend went, and while he was up there, Slider invited Boyfriend up to groove with him, which is why they are now having the rhythm battle, and we hope that you will give your best to help Boyfriend wins.

The custom songs featured in this game are:

How to play Friday Night Funkin VS K.K. Slider online:

You will use the arrow keys to hit the notes of the song, having to press them at the same moment that the arrows on the screen are matching with one another. Focus, because if you hit the notes too late, or even too fast, or you don't hit them at all, you lose and have to start again, and you can't want that to happen, right? Good luck!