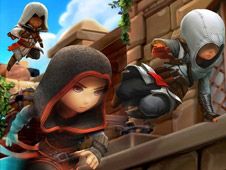 What is Assassin's Creed Freerunners?

The world of online gaming really needed more Assassin's Creed Games for browsers, which is why our administrative team is very excited that right at this moment we could share with you the game called Assassin's Creed Freerunners, the Open Beta version that is now available for you to play, which brings online all the things from this series that players loved so much!

Become the best parkour free-runner assassin, as you compete with players from all over the world!

Yes, you read that right! This is a multiplayer game, because it is way more fun to race against real people than bots, especially if you free run over buildings in historical settings such as the Middle East, Turkey, Egypt, Greece, France, Italy, and other locations featured in this epic saga!

You will control an assassin that runs forward on the buildings, and you will have to press the spacebar to make jumps and double jumps, with the first player that gets their assassin to the finish line of the course becoming the winner, so we really hope that it is going to be yourself!

You will jump, you will swing using special assassin devices, and you should also collect coins from the tracks since you can use them to equip your character with cooler suits and gear.

Start the fun right now, we hope you win countless races and enjoy the game, after which we want to see you try even more of our awesome daily games!