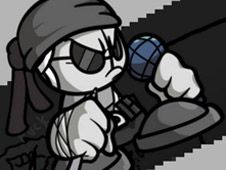 What is Friday Night Funkin VS Sanford?

There are still plenty more new FNF mods online that our team is happy to offer you for free on our website right now when our team has brought over for everyone a cool new version of this game, featuring new songs and characters, which is called Friday Night Funkin VS Sanford, about which you will now learn everything you need to know!

Sanford comes from the Madness Combat series, where he was a grunt, who has white skin, a black bandana, military gear, dark shades on his eyes, a hook in one of his hand, a mic in another one, and you can visibly see lots of bandages over his wounds that he got during the war and the many fights he's been in.

Today he is happy to not be fighting with guns and weapons, but rather with rhythm, music, and dance, so help Boyfriend defeat him in the three custom songs called Blood on My Hands, Nevada Blood, and Devil Hand.

Don't you know how to play FNF Games online?

No need to worry then, because we explain all that you need to know here, starting with the fact that you have to hit the notes of the songs on behalf of Boyfriend and take the songs to the end, turning the progress bar green to win.

Press the arrow keys on your keyboard when the same arrows on the screen match one another, those above Boyfriend, but know that if you miss too many notes in a row, you lose. Good luck!