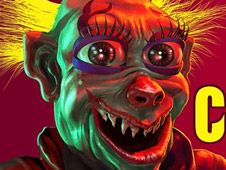 A category that we want to keep expanding because we've seen how much you love the games from it is without a doubt our category of FNAF Games, based around the Five Nights at Freddy's series, where we now have games such as Zoolax Nights, where there are new and interesting characters that you have to survive the horror of, with Zoolax being not just really creepy and scary, but also really dangerous!

Survive the night without being caught by the spooky Zoolax!

Instead of the usual pizzeria that is the iconic setting of the series, this time you will be in an antique store, which is way more creepy, since there are lots of old stuff there, such as the voodoo dolls, with Zoolax in charge, that is haunting the place when the night comes, and now you have to make sure you survive until the morning, without them getting you!

Start by choosing between the normal and hard levels of difficulty. You will use only the mouse to interact with the on-screen buttons that you use to make things happen, move around, and interact with your surroundings! Don't slide for more than 2 to 6 seconds when Sally or Logi are nearby, and watch out for the sewer hole.

To check the hallway you have to press on the red desk button and know that if you lose sight of the clown, he only gets more aggressive and dangerous. If you can, try fixing the tiles in camera 15 as quickly as possible, they will prove to be a great advantage.

Good luck in this survival horror game with FNAF, and if this is your first time in the category, we hope it won't be your last!