FNF: Galaxy Collapse But Everyone Sings it

FNF: In the Galaxy Mod

Friday Night Funkin In The Galaxy 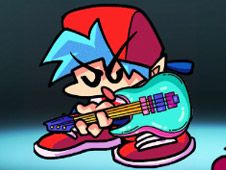 What is FNF Galaxy Collapse?

Sometimes in our new FNF Games of the day, the only antagonist that Boyfriend has to face is the barrage of notes coming his way that he has to hit, sometimes using an instrument, mostly an electric guitar, which is the case right now and here with the addition of FNF Galaxy Collapse, a game we highly recommend for all those who want to challenge themselves while playing rhythm games online!

Do your best to complete the grueling Galaxy Collapse song, on guitar!

Only Boyfriend will be in front of you, and he has to play the guitar so that he hits all the notes of the Galaxy Collapse song, which is very hard, as it has many notes, and they come really fast, so if you're not focused, you won't win!

When you see the arrows that float match with the arrows above Boyfriend's head, you will have to press the same arrow on your keyboard, but make sure not to miss the timing, because too many of these misses mean losing the game.

There are six minutes to the song, in total, and it has over two thousand notes, so don't despair if you mess up, but start again from scratch and try harder! Good luck!