FNF: In the Galaxy Mod 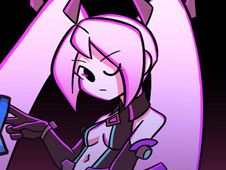 What is FNF: In the Galaxy Mod?

FNF: In the Galaxy is a mod that features Boyfriend battling against a cute child in space, on a spaceship, of course, and while this mod has been around on our website before, quite a long time ago, even, this one is a brand new version that includes a totally new week, where you battle a brand new character, making this game to have a total of six awesome songs:

Win the space rhythm battle, having fun like only here you can!

Well, whether you are playing in the story mode, where you have dialogues and cutscenes between the battles, or you pick a song at random from the free play mode and just go, give it your best to play all the notes according to the charts, reaching the end of the song and winning!

To do this, press arrow keys at the same time as arrow symbols above BF match one another, but be careful not to miss pressing the keys too many times in a row, since that will cause you to lose and have to start the game again from scratch. Good luck, enjoy!