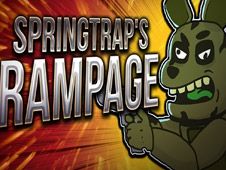 Springtrap’s Rampage is the newest addition that our team has for the fan-favorite category of FNAF Games online, where our team knows how much fun you have whenever you come, and sometimes not all the games are equally as scary as the original ones, since some of them have some funny undertones to them, just like it is going to be the case right now with Springtrap’s Rampage.

Learn about Springtrap, the parody character of FNAF

Spiring Trap was the robot toy at the Pizzeria that none of the other dolls liked, and all of the other robots were mean to him, he had no friends, no one to talk to, and he spends most of his time alone, until one day he snapped and went on a rampage, shooting down everyone around him, a mission that you help him out with in this run and gun game!

You will use either the W, A, S, D keys or the arrow keys to move, jump by pressing the spacebar, interact with items you find by pressing the E key, if you've got an axe, you can throw it with the T button, and if you have guns, aim and shoot them using the mouse.

Try conserving your health as much as possible, since there are no health packs you can use to replenish it, and know that one weapon does not work for all enemies, as some of them require other kinds of items to be defeated.

Go on your crazy rampage right now, try to see how big of a score you can get by taking down targets, and how long you can survive, after which we invite you to continue playing the many awesome games on our website!