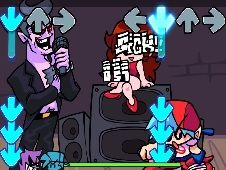 Beep Power is a new FNF mode in which you will have to be with our friend Boiyfriend in a crazy Friday Night Funkin version. This mode is exclusively for those who have played other modes before, because the level of difficulty is very high, and the speed with which the game unfolds is truly amazing.

Your mission will be to help Boyfriend win the battle in the only week available in this game. The design and music is inspired by Brain Power, a well-known, very energetic song that will put you to the test. The action of the game is during the summer, on a green field, where Girlfriend does not appear, which is a bit strange, because this female character is ubiquitous in all modes of this game.

Use the arrows to dance as well as you can!