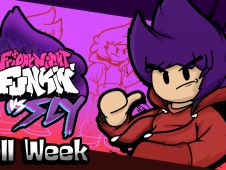 What is Friday Night Funkin vs SLY ?

Sly is the new character from Friday Night Funkin 'with whom you will have to start a new rhythmic adventure. Boyfriend and Girlfriend were in the mall shopping, and Sly was waiting to see them. As soon as he saw them, he approached them, and Boyfriend proved himself with boundless courage because he agreed to take part in a battle in the middle of the mall.

-What does it do, big guy? You taking your girlfriend out shooping?

- I see, I getcha. Good shit. You know you're not a stranger to me. I've seen you around here plenty of times. And you've got a pretty skck voice, homie.

-Hell yeah! You've got hella talent. Yo, you should drep a beat right now. I'm kinda feeling the flow

Who is Sly from FNF?

Sly is a fictional character who appeared in the game Friday Night Ninkin on the recommendation of the creators who developed this game. At the same time, together with this new character, the developers have prepared four new songs for you, which you will have to dance against this character. Sly's physical appearance is quite normal, he doesn't get anything out of the ordinary. Being a young boy, with purple hair, quite short haircut, a red hooded sweatshirt, a pair of gray pants, and he wears a pair of green sneakers. In his left hand he has a microfocus that he plays in the same way as his opponent BF.

The songs you have to dance in this new mod are the following: