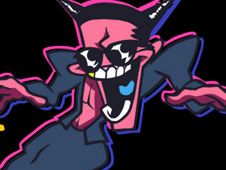 What is FNF vs Henchman?

The fun provided by the Friday Night Funkin Games category of our website does not seem to stop anytime soon, and we're excited for that as content providers, and you should be excited too, as those who keep playing the awesome games we bring over here, with today's one being a game called FNF vs Henchman!

In Week 4, which features Mummy Must Murder, Girlfriend's mother, who is a demon, you can see in the background various Henchmen, which are red devils who wear gangster suits and have sunglasses as well as guns in their hands, and one of them is now your rival in this rhythm game, and we hope you defeat him!

To win you have to make the progress bar fully green, using the arrow keys to sing the notes of the song properly, without missing a beat. When arrows match above Boyfriend's head, press the same ones on your keyboard, but don't have too many misses in a row, since that means losing the game and having to start all over again from scratch. Good luck!