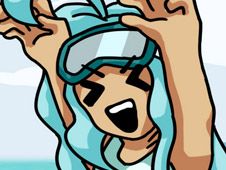 What is FNF vs Atlanta?

You are once again invited to have fun with our newest FNF Games online on the internet, since only here can you find and play the very best of them, which is the case right at this moment with FNF vs Atlanta, featuring not only a new character but awesome new custom songs too, for a fresh gaming experience not worth missing out on for anything in the world!

While Boyfriend and Girlfriend were enjoying their day at the beach like any other lovely couple, they happened upon a mermaid girl called Atlanta, after the world of Atlantis, the city under the seas where she comes from, and now BF needs to defeat her in a rhythm battle on the following three songs:

To achieve victory you need to take the songs to their natural conclusion and make the progress bar turn completely green in your favor. For that you need to sing better and have a better rhythm, pressing arrow keys at the same time as the identical arrow symbols match one another.

If you don't succeed in that, and you miss multiple notes in a row, you lose the game eventually, so be focused so that does not happen. Good luck, and enjoy this game as only here is possible!