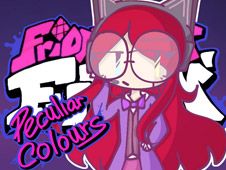 What is FNF vs Coralie: Peculiar Colours?

Every day is a great new day for playing new Friday Night Funkin Games online, precisely because our administrative team is dedicated to bringing you only the best of the best when it comes to this series, and the first new and fresh mod for the day is this one, a game called FNF vs Coralie: Peculiar Colours!

Defeat Coralie from FNF Peculiar Colours and prove that there's no other woman for BF than Girlfriend!

While BF and GF were out shopping, Coralie appeared out of nowhere and challenged BF to a rhythm battle, so now you need to defeat her. Coralie is a girl who wears glasses, has long red hair, as well as cat ears, and the songs you are challenging her on are called:

Reach the end of the songs and turn the progress bar green in order to win the game, which is done by having a better rhythm and getting all the notes of the songs. When arrow symbols match above BF's head, press the same ones on your keyboard, and don't miss too many notes in a row, or you lose the confrontation. Good luck!