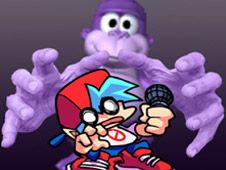 What is Friday Night Sandboxin'?

There is nothing else that Boyfriend loves doing more on a Friday night than playing sandbox games, maybe just taking part in rhythm battles, so we now want to share with everyone here the game called Friday Night Sandboxin', where you get to do both since you will have musical battles against characters from the various sandbox games he plays.

Play Friday Night Sandboxin', and have fun like nowhere else!

This mod features no less than five songs, some original to this mod, some brought over from others, and in them, you go up against a creepy man, a blocky man, a sphere, or maybe even surprise characters. The five songs are called:

When arrow symbols above Boyfriend's head match one another, the same arrow key needs to be pressed on your keyboard to play and hit the notes of the songs at the right time. If you reach the end of the songs and the progress bar is green in your favor, you win but make sure not to miss too many notes one after another, or you lose the match.

Pick between the story mode and free play mode, choose a level of difficulty, and then you will be ready to give this game your best and have fun like only here is possible!